Setting up Fedora 36 From Scratch 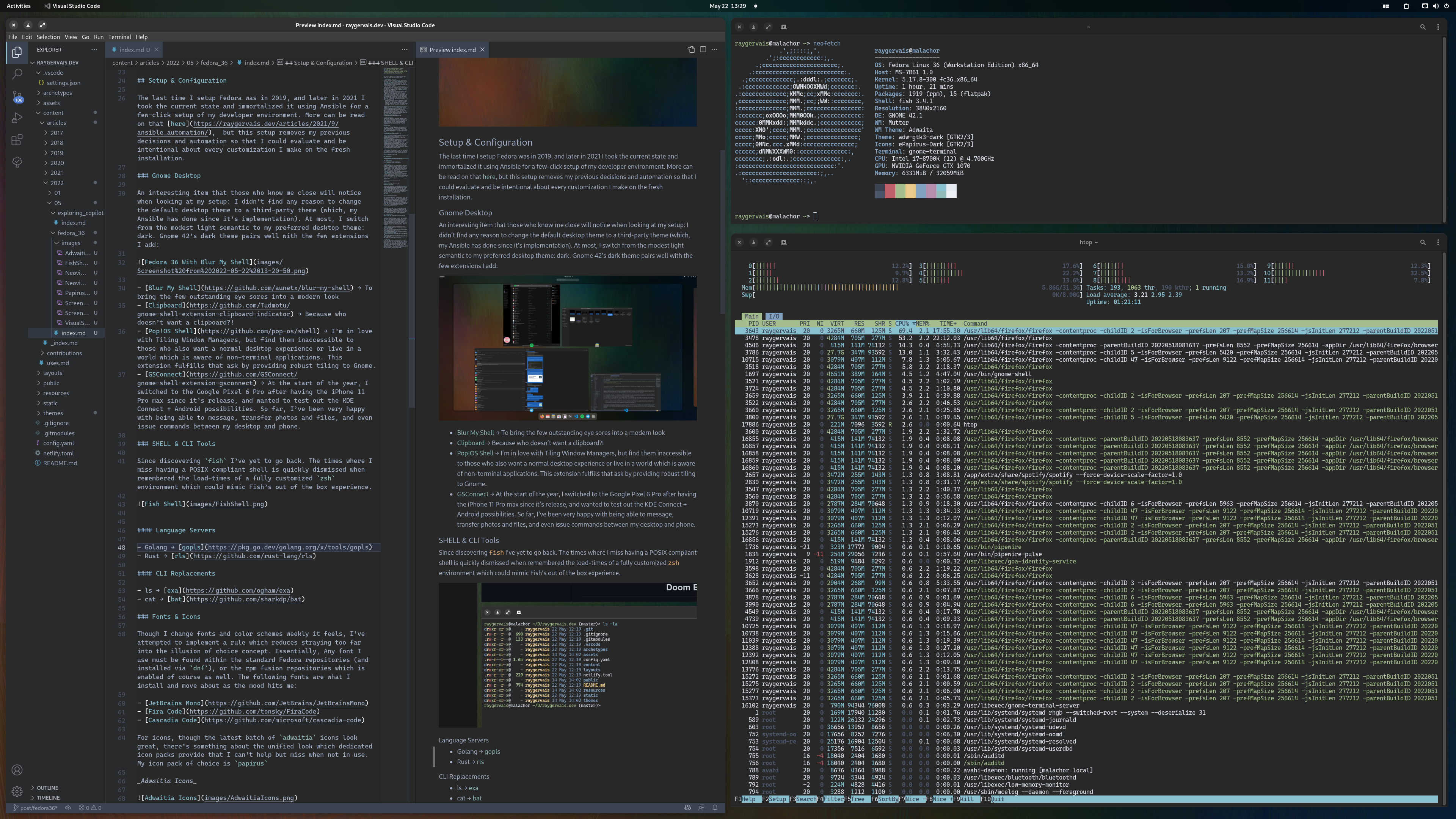 For the first time in years, I managed to break my Fedora installation to the point where I thought, “hey, why not install from scratch and start fresh?” So I did.

Recently, I decided to change it up and also use the offical Fedora Media Writer, which replaced Rufus, Linux Live USB, and Balena Etcher as my Installation Media creator of choice for the past few years. Using the tool itself is smooth and polished as one could hope, but I did discover two gripes:

Installing Linux distributions has improved year over year, to the point where even Arch Linux received a newly polished graphical installer which I find humorous, but a fantastic step in making the distro accessible to more people. In my experience, installation of Fedora has always been a painless experience even when tied with manual configuration or partitioning. So, let’s skip the easy stuff and show what it looks like upon first boot after install with only a small change: the background wallpaper.

The last time I setup Fedora was in 2019, and later in 2021 I took the current state and immortalized it using Ansible for a few-click setup of my developer environment. More can be read on that here, but this setup removes my previous decisions and automation so that I could evaluate and be intentional about every customization I make on the fresh installation.

An interesting item that those who know me close will notice when looking at my setup: I didn’t find any reason to change the default desktop theme to a third-party theme (which, my Ansible has done since it’s implementation). At most, I switch from the modest light semantic to my preferred desktop theme: dark. Gnome 42’s dark theme pairs well with the few extensions I add:

Since discovering fish I’ve yet to go back. The times where I miss having a POSIX compliant shell is quickly dismissed when remembered the load-times of a fully customized zsh environment which could mimic Fish’s out of the box experience.

Though I change fonts and color schemes weekly it feels, I’ve attempted to implement a rule which reduces straying too far into the illusion of choice concept. Essentially, Any font I use must be found within the standard Fedora repositories (and installed via dnf), or the rpm fusion repositories which is enabled of course as well. The following fonts are what I install and move about as the mood hits me:

For icons, though the latest batch of adwaitia icons look great, there’s something about the unified look which dedicated icon packs provide that I can’t help but miss when not in use. My icon pack of choice is papirus

Before my Fedora 36 install, I was messing with Doom Emacs to compare against my primary development environments: Visual Studio Code & Neovim. It was an interesting two-week experiment, and I got fluid enough with the tool that I even drafted and published my last blog post all from Emacs itself. Perhaps I’ll explore more this summer, but for now I’ve gone back to the battle tested setup until I get annoyed once more.

Used primarily for small edits, quick note taking. In the past, I’ve tried to use Vim for more tasks and contexts, attempting to approach an emacs-like environment where from a single editor I could do everything. VIM doesn’t scale as well on that area, so I found myself regressing back to using it as a text editor alone, which led me to mess with the concept of Doom Emacs. After that experiment, I was content with what I had learned and the possibility of using it more in the future, but I found that I was still more productive in Visual Studio Code for when I need a dedicated development environment.

In the past, I had a 200+ vimrc file which configured the editor with a whole bunch of plugins and packages; setting color-schemes, enabling language server support for Go and Rust; formatting markdown tables to always look neat. I found NvChad in the past year, and have migrated to using it plus a far far smaller init.lua file to set the few items that it doesn’t set by default.

No matter how many times I try to escape the embrace of Visual Studio Code, I always find myself returning. It’s one of the best IDEs for any language once configured, and more so is powered by incredible tooling underneath & extensions which tailor the experience. In my Ansible setup, I included at least 20 extensions which are installed during the playbooks run through, but overtime I’ve found myself not needing so many or preferring to keep my Visual Studio Code setup as lightweight as possible. Here’s the standard extensions which I have installed:

An item that I’ve become increasingly aware of is my lack of interest in tweaking 24/7. Gone are the days full of testing & messing around, here are the days where my patience and focus demands stable & accessible. Sure, I may change the fonts & icons to fit my mood and interests for the day, but I don’t find myself constantly wanting to distrohop, try out other desktop-environments or mess with Nvidia drivers where It’s not needed. Part of this I can attribute to Gnome’s recent direction and releases, which compared to the earlier Gnome 3.X days, is a breath of fresh air and much needed.